Sometimes producing a good animated GIF requires a few advanced tweaks, for which scripting can help. So I added a GIF export feature to MoviePy, a Python package originally written for video editing.

For this demo we will make a few GIFs out of this trailer:

You can download it with this command if you have Youtube-dl installed:

Converting a video excerpt into a GIF

For my next GIF I will only keep the center of the screen. If you intend to use MoviePy, note that you can preview a clip with clip.preview(). During the preview clicking on a pixel will print its position, which is convenient for cropping with precision.

Many GIF makers like to freeze some parts of the GIF to reduce the file size and/or focus the attention on one part of the animation.

In the next GIF we freeze the left part of the clip. To do so we take a snapshot of the clip at t=0.2 seconds, we crop this snapshot to only keep the left half, then we make a composite clip which superimposes the cropped snapshot on the original clip:

This time we will apply a custom mask to the snapshot to specify where it will be transparent (and let the animated part appear) .

Surely you have noticed that in the previous GIFs, the end did not always look like the beginning. As a consequence, you could see a disruption every time the animation was restarted. A way to avoid this is to time-symetrize the clip, i.e. to make the clip play once forwards, then once backwards. This way the end of the clip really is the beginning of the clip. This creates a GIF that can loop fluidly, without a real beginning or end.

Ok, this might be a bad example of time symetrization,it makes the snow flakes go upwards in the second half of the animation.

In the next GIF there will be a text clip superimposed on the video clip.

The following GIF features a lot of snow falling. Therefore it cannot be made loopable using time-symetrization (or you will snow floating upwards !). So we will make this animation loopable by having the beginning of the animation appear progressively (fade in) just before the end of the clip. The montage here is a little complicated, I cannot explain it better than with this picture: 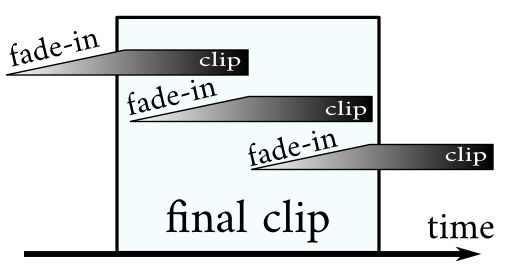 Another example of a GIF made loopable

The next clip (from the movie Charade) was almost loopable: you can see Carry Grant smiling, then making a funny face, then coming back to normal. The problem is that at the end of the excerpt Cary is not exactly in the same position, and he is not smiling as he was at the beginning. To correct this, we take a snapshot of the first frame and we make it appear progressively at the end. This seems to do the trick.

Let’s dive further into the scripting madness: we consider this video around 2’16 (edit: not the video I originally used, it was removed by the Youtube user, I add to find another link):

And we will remove the background to make this gif (with transparent background):

The main difficulty was to find what the background of the scene is. To do so, the script gathers a few images in which the little pigs are are different positions (so that every part part of the background is visible on at least several (actually most) of the slides, then it takes the pixel-per-pixel median of these pictures, which gives the background.